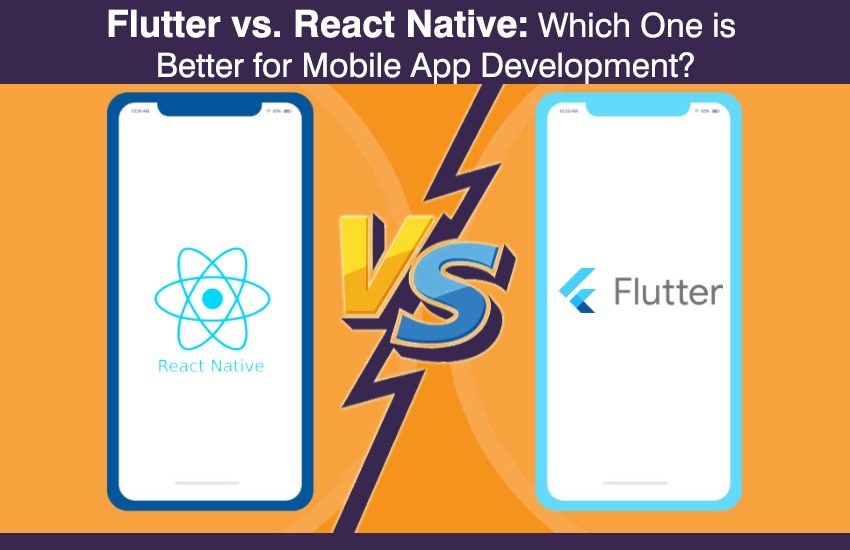 Flutter and React Native – These two are the best cross-platform mobile app development platform used worldwide by developers. The tech giants back both of them; Flutter is created by Google while React Native is developed by Facebook, making their presence even more robust and credible.

Are you planning to invest in a mobile application development, but not sure which cross-platform technology to choose? This article will clarify your concepts about Flutter vs. React Native, ultimately helping you choose the technology that fits your budget and expectations.

Do you know, there are 5 Billion + mobile phone users worldwide? As per a recent survey, 90% of the mobile time is spent on mobile apps, while only 8-9% of the time is spent on the internet. These stats opens up a massive room for mobile app development and ample scope for developers.

To meet the growing need for app development, many players in the market offer native app development technology. However, Flutter and React Native are running way ahead in the race. The reason for their popularity is their cross-platform app development solution, an open-source framework, and powerful technology. Both these frameworks also work on the concept of single code-based for different operating systems like Android, iOS, Windows, etc.

Flutter and React Native comes with other benefits like they are fast to code and quick bug fixing. And if we talk about their age, Flutter was launched in 2015 by Google while React Native is a bit matured as it was introduced in 2015 by Facebook. Let’s get into in-depth about these two cross-platform technologies. 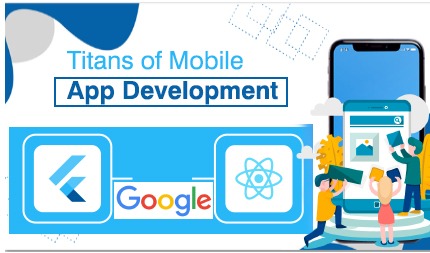 Now let’s have a comparison between these mobile app development frameworks on several aspects.

1. Which one is more popular? 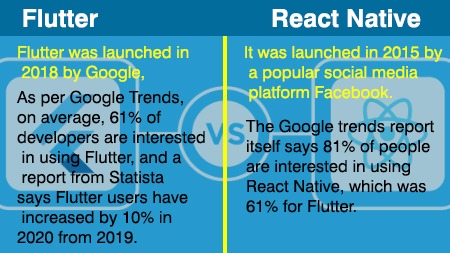 Flutter was launched in 2018 by Google, since then it started ascending the ladder speedily. Needless to say, the gaining popularity of Flutter has reduced the market share of React Native to much extent. Besides, the intuitive mobile apps building framework of Flutter has made many developers bend towards it. As per Google Trends, on average, 61% of developers are interested in using Flutter, and a report from Statista says Flutter users have increased by 10% in 2020 from 2019.

On the other hand, React Native is five years older than Flutter, as it was launched in 2015 by a popular social media platform Facebook. Age and credibility have given the advantage to React Native in becoming highly popular than Flutter. Also, It has a more significant community than Flutter, making it a preferred mobile app development framework than the rest. In fact, the Google trends report itself says 81% of people are interested in using React Native, which was 61% for Flutter.

Until now, React Native carries an edge over Flutter, but the rising popularity of Flutter indicates that it will catch up with its closest competitor pretty soon. Moreover, both of these frameworks are coming up with new developments, so it’s unpredictable to say which one will be more popular. 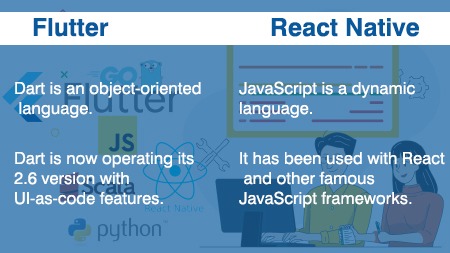 Dart programming language is used in Flutter. Google introduced Dart in 2011, but now developers rarely use this language.

On the other hand, React native uses JavaScript programming language, one of the most popular languages amongst developers.

JavaScript being a default language for many browsers, is handy for many developers. Its dynamic nature is easy to adopt, and hence most developers prefer to use React Native as a preferred mobile app development platform.

3. Which has an easy installation process? 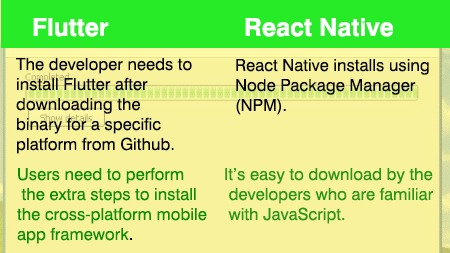 The developer needs to install Flutter after downloading the binary for a specific platform from Github. Users need to perform the extra steps to install the cross-platform mobile app framework. However, the same can be improved once Flutter starts supporting packages like Homebrew, MacPorts, APT, etc.

React Native installs using Node Package Manager (NPM). It’s easy to download by the developers who are familiar with JavaScript. NPM installs the packages locally or globally, and the developers just need to understand where the binary is situated.

Installation steps for React Native are more straightforward in comparison to that for Flutter. The latter requires an extra step to download the binary from the source code and add it to the path. Besides, with React Native, there is no need for such a hassle, and you can install using package managers.

4. Whose technical architecture is better? 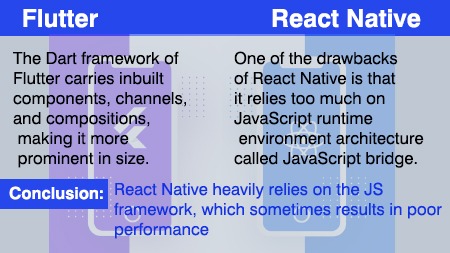 Flutter doesn’t require a bridge between the framework and the platform’s native modules—the toolkit used the Skia C++ engine and UI frameworks such as Cupertino and Material Design. The Dart framework of Flutter carries inbuilt components, channels, and compositions, making it more prominent in size. 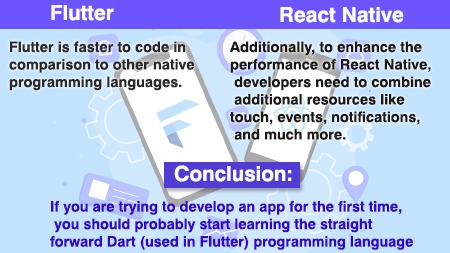 Flutter is faster to code in comparison to other native programming languages. When it comes to app performance, the application build on Flutter is quicker and easier to code, bringing comfort to the developers.

React Native can be challenging to understand by a few developers as it requires familiarity with the JavaScript language. Additionally, to enhance the performance of React Native, developers need to combine additional resources like touch, events, notifications, and much more.

The developers can best evaluate the performance aspect. If you are familiar with or have hands-on knowledge of JavaScript programming language, you will be comfortable building a React Native app. If you are trying to develop an app for the first time, you should probably start learning the straightforward Dart (used in Flutter) programming language.

6. Which one is easy to set up and configure 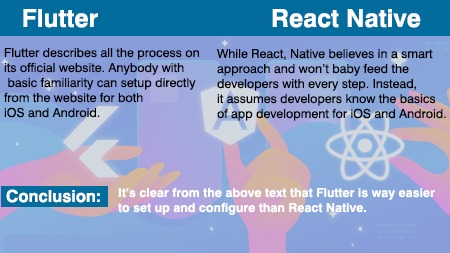 Flutter describes all the process on its official website. Anybody with basic familiarity can setup directly from the website for both iOS and Android. Besides, Flutter gives you convenience through FlutterDoctor, a CLI tool that guides you through the setup and configuration process. It scans the local machine and tells which tools preinstall and what next needs to be installed in the system.

While React, Native believes in a smart approach and won’t baby feed the developers with every step. Instead, it assumes developers know the basics of app development for iOS and Android. The React Native document has limited Xcode command-line tools, which are enough to learn the basics. A certain level of mobile app development experience is needed to set up React Native.

It’s clear from the above text that Flutter is way easier to set up and configure than React Native. The latter requires expertise in mobile app development to some extent. 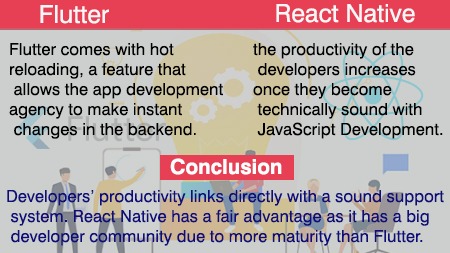 Flutter comes with hot reloading, a feature that allows the app development agency to make instant changes in the backend. Moreover, these changes reflect quickly in the code, that too, without saving the file. Along with that, Flutter equips with an advanced software development kit that developers can use to check the internal issues instantly.

React Native also comes with a hot reloading feature. However, the productivity of the developers increases once they become technically sound with JavaScript Development. Also, developers are free to choose any text editor or IDE support while working React Native.

Developers’ productivity links directly with a sound support system. React Native has a fair advantage as it has a big developer community due to more maturity than Flutter. 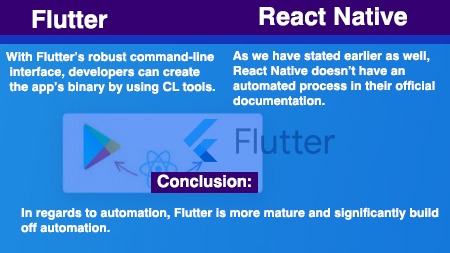 To release the apps on Android or Apple platform can be a bit trickier. However, that problem resolves with Flutter mobile app development framework. With Flutter’s robust command-line interface, developers can create the app’s binary by using CL tools. Moreover, Flutter has clear documentation on building an releasing an app on the Play Store or App Store.

As we have stated earlier as well, React Native doesn’t have an automated process in their official documentation. Instead, they have the manual method to deploy the native apps to the App Store or Play Store.

In regards to automation, Flutter is more mature and significantly build off automation. 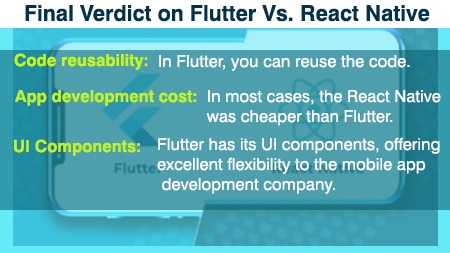 Are you still in a dilemma that you should choose a React Native developer or Flutter? We would suggest that you should not look for a winner here. Instead, look for a feasible solution that fits your business. Let’s have a quick look at the following criteria to help you reach a conclusive decision.

This unbiased article was prepared after several trials & tests on React Native and Flutter cross-platform frameworks. Both of them have some pros and cons, like many native applications. However, Flutter is developing faster due to its easy to learn Dart programming language; hence, it entered into a new mobile app development era much strongly than React Native. Moreover, in several aspects, React Native is still incomparable and wins hands down.

If you are still stuck between these two titans of the mobile apps development framework or need any help, you must consider contacting the Software Consulting Services based company. The experts here can help you choose the right platform that suits your business needs.