We are living in this era of technology where everything from small to big is connected with the internet. In developing the software, apps, and websites, web developers play a great role. Without their work, it would not be possible for each of us to enjoy the technology we are using. Let’s have the look at what skills a person requires to become a web developer and about the job responsibility of the developers. First of all, understand what is web development? 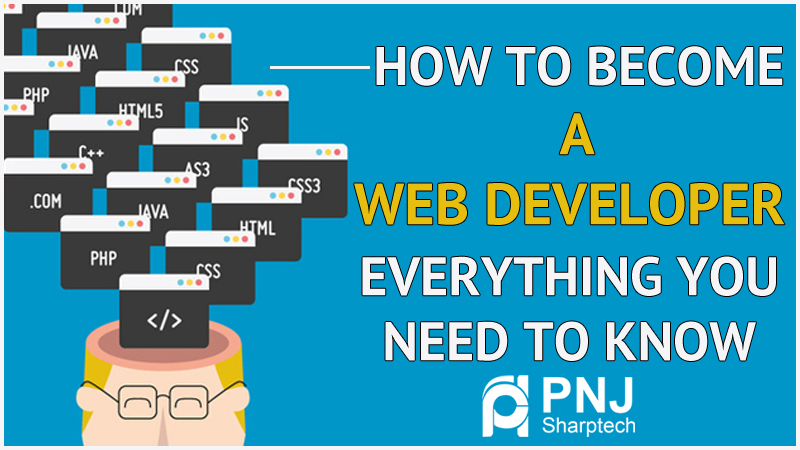 It is a process of developing applications and websites for the internet. Web developers are the people who develop ecommerce websites, content management systems, apps, static website pages, social media platforms, and others. In this digital world, all the tools that use the internet are the creation of web developers.

Let’s know all these 3 things in detail-

It is also called the backend. In this, a web developer works to control what’s going on behind the scenes. Backend is the part that is not visible to the website users and it is only handled by the developers. A developer knows how to store and organize data that even by ensuring the smooth functioning of the frontend of the website. All the changes and communication happens on the front end, they are connected with the backend.

Let’s understand with an example- When users fill the form at the front end, then the browser sends a request to the backend i.e. server-side. Now you can understand that all the 3 stages in the development are connected and a web developer would be the best if he/she has a good knowledge of the 3 stages of the development process.

Client-side development is also called frontend development. A web developer work to develop the front end of a website or app which can directly be experienced by the users. Developers have great knowledge of the coding of the front end. This is an essential part where a developer needs to be an expert. It includes the knowledge of creating the fonts, menus, contact form, layout and other things related to the frontend.

Websites basically depend on database technology. Database technique makes it easy to retrieve, edit, save and organize data of a website and it runs on a server.

These three are fundamental to the development of any website and application. For becoming web developers, one needs to be experts in these 3 concepts. These are the basic requirements for becoming great developers.

Responsibilities of the Web Developer-

Things that Web developers work with-

Web developers work with mainly 3 components such as-

Libraries are something which helps to make the job of the developers’ easy & effective. Libraries are a prewritten code that you can use for the particular use-cases. Libraries are nothing but the collection of effective code grouped together to be reused later during the development process. It helps and enables web developers for reaching a similar end goal that even writing small code.

Languages are the building blocks in the development of the software, apps, apps, and others. There are so many languages such as markup, database, programming and style sheet languages. Developers use the languages according to the requirements of their projects.

Frameworks are ready-made components and tools that help the developers to write the code quickly. These include libraries that mean libraries are smaller than the framework. Choosing the frameworks considered one of the big decisions of the web development process. There are some famous frameworks such as angular, rails, bootstrap and others.